In the early 1930's probably the most famous exhibitor showing Herdwicks was Mrs Heelis, better known as Beatrix Potter, who was a great supporter of the Herdwick Breed and regularly attended and showed her sheep at Eskdale. She owned Penny Hill Farm in Eskdale which she bequeathed to the National Trust along with her other properties. In 1931 she won Best pair of Ewes and Best pair of Gimmer lambs and can be seen in the image below with Tommy Storey (her shepherd) one of her prize winning ewes, 'Water Lily' at the show. 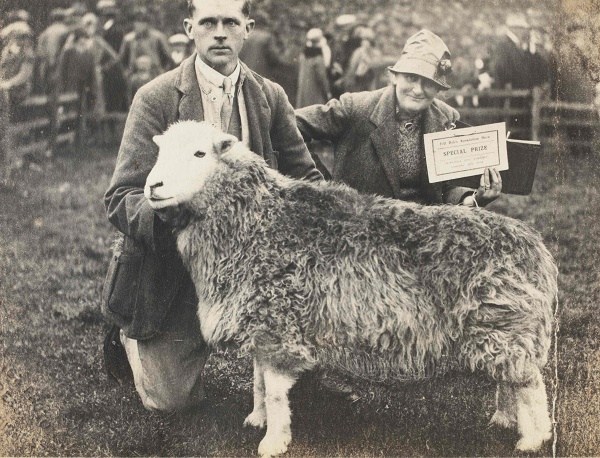 Mary Fair was another famous supporter of the show in the early 1900's. She took numerous photographs of the show and surrounding area, a collection of which can be seen in the book Herdwick Sheep and the Eskdale Show, “ A Portrait by Mary Fair”. This can be purchased from many local outlets at £4.95

As well as the Show information being interesting some of the Adverts in the early Catalogues were amazing, for example, in 1899 John S Millar & Sons, Water Engineers of Annan were advertising that Wind Power costs nothing with one of their windmills, and people think wind power is new. There were also adverts encouraging farmers to emigrate to Australia or Canada, seems a good opportunity as you could get 160 acres of land free.

Since our first Show in1865 we have only had 12 secretaries