The first show held was for Herdwick sheep only, the total prize money was £23. In some of the early years over 500 Tups came to Eskdale Show, the majority of which would be walked there, taking several days to reach the Woolpack. For example Keswick sheep would be walked up Borrowdale then over Styhead Pass into wasdale, then over Burnmoor Tarn track into Boot and on to the Woolpack. In 1867 there were entries from as far away as Threlkeld, Buttermere, Windermere, Coniston and Cockermouth, it would have been a tremendous sight seeing all the Herdwicks converging into the Show field. 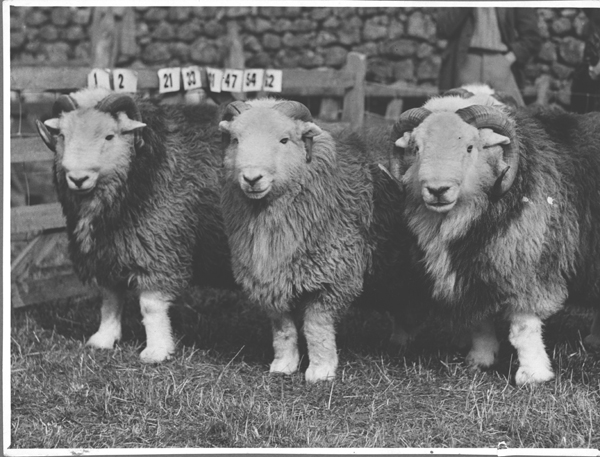 In 1868 a silver cup won by John Sharpe of Fisherground, was given for the best 3-6 acres of turnips, this was the start of the Roots section. Classes for Shepherd dogs were added in 1870, at that time the show also included classes for Herdwick wool shown in fleeces. In 1874 hound trailing first appeared in the catalogue, and was won by John Jackson’s Bowman. Ed Tyson gave a silver cup in 1875 for the first Fell Race to be held at the show.

Later, in 1884 an Albert Chain was given for the Best Gentleman Step dancer and a handsome Silver Bracelet for the Best Lady Dancer. This subsequently became a Waltzing competition, which was held under the Oak tree in the Show field. Singing competitions were also started about the same time.

Foxhounds and Terriers were added in1909, at first for the Eskdale and Ennerdale pack only then a few years later for any of the Fell Packs.

Bread, butter and eggs had been exhibited for many years before 1925. There is then a gap until 1933 when the Women's Institute Exhibition, Handicraft section was introduced with prizes in each class of 1st 5/- and 2nd 2/6p. There were classes for Embroidery, Knitting, Sewing, Rug making, Leather work, Seagrass Quilting, and Italian Quilting, in the Produce sections the Classes included Bottle of homemade Rhubarb wine, 1lb glass jar of Bramble Jelly, Iced Sandwich cake and any variety raised meat pie.

In more recent years Classes for  Walking sticks, Childrens Sports, Vintage vehicles and Poultry have been added to the Show and more Trade stands and Craft tables are present.